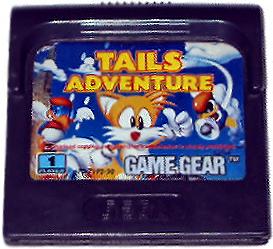 Sonic and Tails have temporarily parted for a little vacation time, and Tails has decided to visit his favorite holiday spot. It's a little island he discovered, and named it after himself: Tails Island! Problem is, there won't be much relaxing on this vacation. That's because a heavily-armed bird army is sweeping through the island! Suddenly there is a great noise, and the woods are suddenly ablaze! Tails sees a flying fortress hovering on the horizon and our two tailed hero isn't about to give up his island to some crazy army of birds, so armed at the start with nothing but simple bombs, Miles takes on the "Battle Bird Armada", with all the animals on the island counting on him!

There is no time for guessing. As Tails, you must fight the bird forces and stop the Battle Fortress from taking complete control of the island! On land, in the air, and at sea, you'll be battling some pretty tough birds! Several useful items are scattered throughout the island which you will need in your adventures. A platformer that plays absolutely nothing like traditional Sonic games, and has alot of action-RPG elements mixed in. It's a really fun game one way or the other, with an emphasis on collecting items and returning to old worlds to pick up stuff you couldn't get to the first time. There's also alot of puzzle-solving elements, figuring out which items to use for any given situation...this was the type of game the GG was made for. There's also a spiffy music track in the game that's actually a less-annoying remix of Sonic 2's Aqua Lake Zone! The enemies look like various takes on The Ninja Crows from Samurai Pizza Cats, and the boss looks like a fat version of Bean the Dynamite. But dont be assuaded because this is an excellent game nonetheless!